If your company, dormitory or home supports Wi-Fi 6 network, then in terms of speed, stability and security, the performance of these Snapdragon 865 flagship phones will far exceed those that do not support Wi-Fi 6 standards. Product mobile phone.

Write at the end

In recent years, with the explosive growth of data traffic and the continuous increase in the number of terminals, the subsequent network speed, complexity, security and network congestion issues are what ordinary users urgently want to change. The sixth-generation Wi-Fi based on the 802.11ax specification is aimed at these demand points and brings users a faster, safer and more stable wireless connection experience.

Wi-Fi 6 provides higher network capacity and efficiency through excellent flexibility and scalability, and further improves network bearing and coverage. You may ask, since 5G networks will gradually become popular, will Wi-Fi 6 still be necessary? The answer is of course yes.

Wi-Fi and cellular network terminals have been jointly developed for five or six generations. Even now, both 5G networks and Wi-Fi have their own usage scenarios and objects. Using 5G outdoors and Wi-Fi at home is an economic choice for most people. With the development of technology, the two technologies will have a complementary and substitute relationship in different scenarios, but they will still coexist for a long time.

Thanks to Qualcomm’s technology accumulation in the fields of cellular data and Wi-Fi, it is easier for Qualcomm to integrate the advantages of the two in Wi-Fi 6 technology, bringing a better network connection experience. In the future, Wi-Fi 6 technology will also work with 5G to achieve real interconnection and interoperability, opening a new era of wireless connectivity.

02 Why do more and more mobile phones use Wi-Fi 6?

Users familiar with the mobile phone industry know that mobile phones with Qualcomm Snapdragon processors currently on the market account for a very large proportion, especially in flagship phones. The reason is very simple. One is because of the powerful comprehensive performance of Qualcomm Snapdragon processor , and the other is that Qualcomm has obvious technical advantages in the communication field . 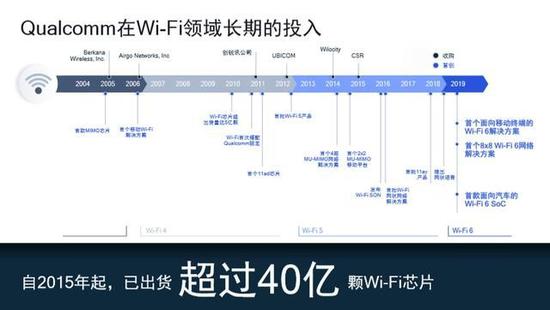 Qualcomm’s Wi-Fi 6 technology in mobile terminals is one of the most concerned points for consumers. Everyone is inseparable from mobile phones nowadays . Faster, more stable and safer networks are the pain points of modern people’s network needs . Based on these issues, Qualcomm’s FastConnect 6800 subsystem was unveiled with the launch of the Snapdragon 865 mobile platform. The FastConnect 6800 subsystem not only integrates Wi-Fi 6 function points, but also has more technological innovations. 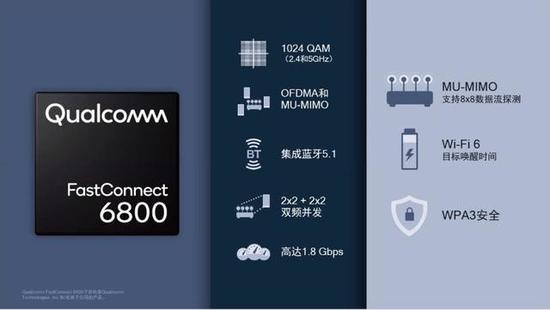 FastConnect 6800 can be said to be the killer of Qualcomm in Wi-Fi 6 technology. It has new technologies that are different from common Wi-Fi 6 solutions, such as 2×2+2×2 dual-band concurrency and 8×8 data stream detection .

In our daily life, we all know that roads with wide roads are not easy to traffic jams, transportation efficiency is higher, and the network is also the same. When we watch videos and play games, once the network is congested, the video loads slowly, and the game latency is high, the experience is very poor. 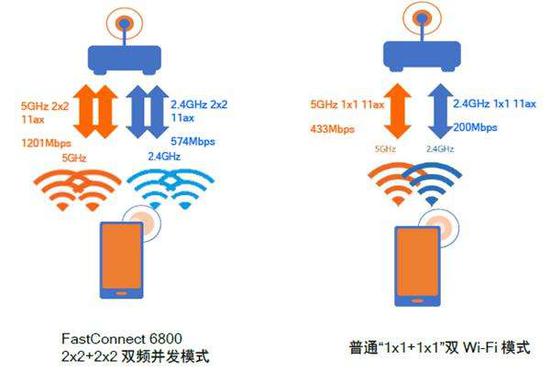 2×2+2×2 dual-band concurrency means that mobile phones of this technology can simultaneously access the 2.4GHz and 5GHz frequency bands , and support 2 data streams for transmission on each frequency band (support 2×2 MIMO at the same time), and is Based on the highest 1024QAM modulation method, the maximum data throughput can reach 1.8Gbps, bringing higher data transmission for users . In addition, because it uses dual lines to work at the same time, the network data delay will be lower , which is undoubtedly a favorite for ultra-high-definition video and game lovers.

The 2×2+2×2 dual-band concurrent function also has better stability and wider coverage . Qualcomm Product Marketing Director Hu Peng once said that Qualcomm’s 2×2+2×2 dual-band concurrency is a hardware-supported technology, which is different from the ordinary software algorithms on the market, so there is no problem when 2.4GHz and 5GHz cannot work at the same time or switch exists. The instability of the problem.

article links：Why do more and more mobile phones use Wi-Fi 6?

One Reply to “Why do more and more mobile phones use Wi-Fi 6?”